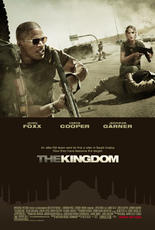 Becky and I went to see The Kingdom on opening night at the Kerasotes theaters in Castle Rock, Colorado. The Fandango website at The Kingdom describes the movie as follows:

“When a terrorist bomb detonates inside a Western housing compound in Riyadh, Saudi Arabia, an international incident is ignited. FBI Special Agent Ronald Fleury (Jamie Foxx) quickly assembles an elite team (Chris Cooper, Jennifer Garner and Jason Bateman) and negotiates a secret five-day trip into Saudi Arabia to locate the madman behind the bombing. Upon landing in the desert kingdom, however, they discover Saudi authorities unwelcoming of American interlopers into what they consider a local matter. The FBI agents find their expertise worthless without the trust of their Saudi counterparts, who want to locate the terrorist in their homeland on their own terms. Fleury’s crew finds a like-minded partner in Saudi Colonel Al-Ghazi (Ashraf Barhoum), who helps them navigate royal politics and unlock the secrets of the crime scene. With these unlikely allies sharing a propulsive commitment, the team is led to the killer’s front door in a blistering do-or-die confrontation.”

The Review
The Kingdom has some powerhouse stars like Jamie Foxx and Jennifer Garner, along with some great trailers to really pump up the film. Becky wanted to leave after about 20 minutes and the first part of the film is really sick with little kids getting killed by terrorists. The promo says that you’ll be on the edge of your seat for the last 20 minutes of the film and that’s pretty much about the entire film. Besides having to watch a bunch of actors dressed up as FBI agents get frustrated with the Saudi Arabian government for two hours as they sit in a gymnasium talking about their lives.

It’s a dud of a film and the moral of the story is that if you move to Saudi Arabia and put your life and that of your family’s into the hands of the Saudi Arabian government for a few more bucks than you’re an idiot. Duh! Somebody had to make a movie to explain this to us? Give me a break.

Honestly, I had to step back and ask if it was just Becky and I who thought this movie was stupid because I’ve been so critical of movies at the box office lately, so I decided to check another movie review website RottenTomatoes.com and they agree with me. 53% of their visitors thought The Kingdom was “rotten”. So, I can have confidence in telling you to wait for the rental rack to see this one, but be prepared to fast forward to the end, which isn’t much better than the rest of the movie, so it’s really a Don’t Bother in our book.

Want an example of what to expect? There is one part of the film where they spend about 20 minutes sorting through mud trying to figure out what kind of vehicle the terrorists used to blow up a building and kill their friend in the FBI. Keep in mind, you get to watch this and you’re waiting for it to have some real significance to the film. After pulling car parts out of the mud for 20 minutes, it turns out to be an ambulance and the lead agent of the mud expedition is all excited that they have solved the clue. Would it have made a difference if it were a Jeep Liberty or a Toyota Corolla? I’ve seen Scooby Doo cartoons with more excitement from Velma finding clues. At least they had some relevance to solving the caper.

Actually, I think the best part of the movie was the beginning where it tells about the history of Saudi-American relations and our ties to oil with Saudi Arabia. Beyond that the movie is a waste of time.