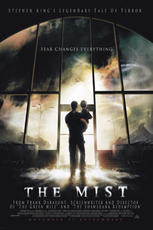 Becky and I went to see The Mist at the AMC theaters in Highlands Ranch, Colorado on Thanksgiving night. The Fandango website at The Mist describes the movie as follows:

“Following a violent thunderstorm, artist David Drayton and a small town community come under vicious attack from creatures prowling in a thick and unnatural mist. Local rumors point to an experiment called “The Arrowhead Project” conducted at a nearby top-secret military base, but questions as to the origins of the deadly vapor are secondary to the group’s overall chances for survival. Retreating to a local supermarket, Drayton and the survivors must face-off against each other before taking a united stand against an enemy they cannot even see.”

The Review
The Mistis the latest Stephen King novella turned into a movie and it stinks as bad as so many of his previous films. There are very few Stephen King movies that I’ve ever seen that are worth recommending. The best was probably Salem’s Lot and after that they have all been down hill. I’ve always been up for a good horror movie, like Dracula, Frankenstein or the Werewolf, but this movie is ridiculous and pathetic.

The entire story takes place in a supermarket grocery store after a mist forms bringing with it giant pre-historic bugs that supposedly have come in from a parallel world that has been opened up by the military working with time travel. That in itself was stupid. It would have been more believable that the military was conducting some high-tech laboratory experiment to create the ultimate super weapon that went wrong. However, that still wouldn’t have saved this film. It was terrible. Like a buddy of mine said, “Sounds like a remake of The Fog only with bugs.”

As bad as that movie was, The Fog was actually better than The Mist. The characters in this film are absurd, the events that take place are ridiculous and the movie is disturbing, annoying and boring. The ending really sucks too when the only Hero of the film kills his own son after spending almost two hours trying to save him from being a bug Lunchable. How goofy is that?

This isn’t even a good rental. Our advice would be to skip it. Maybe we’ll get lucky and some Hollywood executive will remake Salem’s Lot one of these days.