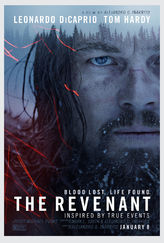 Becky and I went to see the movie The Revenant at the Regal Cinema in Lone Tree, CO tonight with our friends Tammy and Bruce. The Fandango website at The Revenant describes the movie as follows…

“In 1820s America, frontiersman and fur trapper Hugh Glass (Leonardo DiCaprio) joins a pelt-gathering expedition along with his teenage son Hawk (Forrest Goodluck). When attacks by Arikara Indians claim the lives of many of the men in the party, Glass leads a small group on a new path back to a U.S. fort. While attempting to hunt game on the journey, Glass is mauled by a grizzly bear and horribly wounded. Assumed he’ll be dead soon, Glass is left under the care of roughneck John Fitzgerald (Tom Hardy), and the young and inexperienced Jim Bridger (Will Poulter) as Hawk watches on in horror. Fitzgerald betrays Glass and leaves him for dead, alone and unarmed. Glass nurses himself back to health and charts a course of revenge. Alejandro González Iñárritu directed this pulse-pounding epic…”

The Review:  Leonardo DiCaprio should win an Oscar for his role in this film.  His acting is amazing, even if for much of the film he doesn’t say anything and a bit like Tom Hanks character in the movie Castaway where he is alone most of the time.  This movie has some of the best cinematography I’ve seen in a film in a long time and speaking of long, this film is really long!  It is not politically correct by any stretch, which is refreshing because early America was not politically correct.  The film shows how the Native American tribes were not all nice guys, like so many want to portray today.  The Sioux killed the Pawnee the same way that the French and Americans killed the Sioux and other tribes, along with one another.  It was everyone against everyone in a fight for survival and territory.  The reality that the Native Americans were not all friendly to one another, but in fact were just as brutal as the American settlers.  Which you definitely do not see very often in movies, unless you are watching a documentary.

I think that is one of the great aspects of this movie is that early American history was worse than an episode of Naked and Afraid. It is easy to forget and just be thankful to have a warm roof over your head.  There is a scene early on where Hugh Glass, played by DiCaprio, is mauled by a grizzly bear and it is incredible and hard to watch.  The movie is just amazing in its realism.  It’s slow at times, but the will to live and survive and what this man endures is amazing.

The Director should win an award for this movie too, along with Tom Hardy who was awesome as well.  This film shows how low the life expectancy actually was for many of the traders living in the wild frontier.  Especially, in places like Colorado where you could freeze to death, be killed by wildlife or murdered by your fellow man.  The movie will really make you appreciate that we do not have to endure the challenges that the first settlers had to go through colonizing America today.  We have other challenges of course, but someone or some animal isn’t trying to kill you when you go out for a run in your neighborhood.

In the Hollywood world of ridiculous special effects and completely unrealistic action films or just plain stupid movies, it was refreshing to have a film that was so realistic and so well done.  The word revenant means “a person who has returned, especially supposedly from the dead.“, which is a really clever movie title.  We all really liked it and Becky and I thought it was a Don’t Miss It.  I am not sure what Tammy thought, but I think she liked it and I know Bruce really liked it.  It is disturbing at times, but it’s definitely a don’t miss it in our opinion.