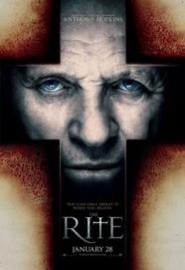 Becky and I went to see The Rite this weekend at the AMC Theaters in Highlands Ranch, CO. The MovieFone website at The Rite describes the movie as follows:

“Inspired by author Matt Baglio’s nonfiction book of the same name, director Mikael Håfström’s supernatural thriller traces the experiences of a young seminary student who discovers the true power of faith after being drafted into the Vatican’s Exorcism School and confronted by the forces of darkness. – Jason Buchanan, Rovi…”

The Review
The Rite is a disturbing film.  It stars Anthony Hopkins and a newcomer to the Big Screen, Colin O’Donoghue, as priests who perform the ritual of exorcising demons. The Rite is not super scary, don’t get me wrong it’s scary, but more disturbing than scary because it’s based on true events and a non-fiction book about real demon possessions. It’s not like The Exorcist, but it’s freaky because you see the power of the demonic and the Devil in creating deception and harming people.

Parts of this film are nuts. It’s fascinating and wild because you watch a young man struggle with his faith about whether he believes the Devil and the demonic, which therefore makes him question if God is real. The demons he is fighting capitalize on his lack of faith and that doubt nearly costs him his life. The acting in this film is fantastic. Anthony Hopkins delivers again like he did in Silence of the Lambs. The guy is just so good at playing really creepy characters.

We saw this film with our friends Rod and Kimberly and we all liked it. I think it’s a movie that everyone should see. It’s rated PG-13 and probably should have been rated R, so don’t take your kids to this one. However, for adults, I think that all too often we discount the supernatural and fail to realize that the Devil is a real fallen angel that is out to destroy God’s creation. You’ll get that message loud in clear in this film. You just might find yourself opening your Bible again, if you haven’t in a while and asking God to forgive your sins, so you can be make sure that you don’t end up in the dark – now or in the future.