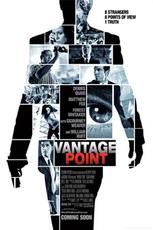 Becky and I went to see the new thriller Vantage Point at the AMC theaters in Highlands Ranch, Colorado on Friday. The Fandango website at Vantage Point describes the movie as follows:

“Thomas Barnes and Kent Taylor are two Secret Service agents assigned to protect President Ashton at a landmark summit on the global war on terror. When President Ashton is shot moments after his arrival in Spain, chaos ensues and disparate lives collide. In the crowd is Howard Lewis, an American tourist videotaping the historic event to show his kids when he returns home. Also there is Rex, an American TV news producer who is reporting on the conference. It’s only as we follow each person’s perspective of the same 15 minutes to and immediately after the shooting that the terrifying truth behind the assassination attempt is revealed.”

The Review
Vantage Point had a great Preview and we were really fired up about seeing this film, like millions of other people who went to see it this weekend. Dennis Quaid is great in this movie, in fact, most of the acting is very good, but the acting can’t save the film.

The story is lame, it’s too convoluted and not very realistic that one small group of terrorists could pull off what the movie proposes. However, that’s not the worst part of this film, but what totally wrecks it is the premise that seeing an assassination on the President from different view points is a good idea for a movie.

It was more like an action packed version of Groundhog Day that got tiring after the second showing of the event. Just when we started to get into the movie we had to relive the part we just saw, over and over again. It totally wrecked what could have been a good movie.

We both thought it was a Rental at best or not even worth your time.

Tune Into The Cool Car Guy Show Every Monday – Thursday 10AM – 11AM MST on Castle Rock Radio – CastleRockRadio.com