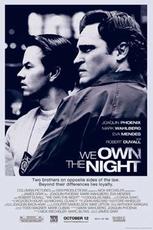 “In 1988, New York’s police wage an all-out war on drugs, and guilty and innocent alike become casualties. Bobby Green (Joaquin Phoenix), manager of a nightclub that is often frequented by gangsters, tries to remain neutral but hides a potentially fatal secret: His brother (Mark Wahlberg) and father (Robert Duvall) are both cops. Caught in the middle, Bobby and his girlfriend, Amanda (Eva Mendes), are forced to choose sides – between the familial ties he has rejected and a future he cannot avoid.”

The Review
We Own The Night has an all-star cast including Mark Wahlberg, Joaquin Phoenix, Robert Duvall and Eva Mendes, so you would think that this would be a fantastic flick. Unfortunately, the story is a bit too generic. All of the characters are interesting for a while and the acting is intense at times with a couple twists along the way.

Becky liked We Own The Night more than I did. We both thought it was a pretty good flick and I was into it for about half the movie, but then it just lost me since the drug dealers were far too stupid and there were too many things that weren’t feasible. It reminded me a great deal of that movie Copland where it was much ado about nothing with plenty of great actors, but a story that made you leave thinking “Yeah. Right?”.

I’m suggesting you wait for the rental rack for We Own The Night and Becky thought it was worth the $9 admission at the box office.