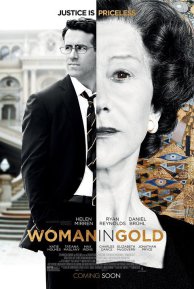 Becky and I went to see the film Woman in Gold at the AMC Theater in Highlands Ranch, CO.  The MovieFone website at Woman in Gold describes the movie as follows…

“Sixty years after fleeing Vienna, Maria Altmann (Helen Mirren), an elderly Jewish woman, attempts to reclaim family possessions that were seized by the Nazis. Among them is a famous portrait of Maria’s beloved Aunt Adele: Gustave Klimt’s “Portrait of Adele Bloch-Bauer I.” With the help of young lawyer Randy Schoeberg (Ryan Reynolds), Maria embarks upon a lengthy legal battle to recover this painting and several others, but it will not be easy, for Austria considers them national treasures…”

The Review: This film was based on a true story and the story is really quite amazing.  It jumps between World War II when the Nazi’s confiscated personal property and everything else from the Jewish people and modern times with a woman who lived through the German nightmare.  The woman in gold is actually a painting that was painted in gold and worth millions, but owned by the primary characters family and she wants it back from the Austrian government.

The acting in this film is fantastic and I am expecting that Helen Mirren will be nominated for best actress for this movie.  If she isn’t I will be surprised because she’s amazing in this film.  Ryan Reynolds was great in this movie too and they worked extremely well together and the story is great.  It will keep your interest and I liked the way it jumped back to when she was a young woman, so you could experience what her and her family went through during the Holocaust.

Unfortunately, that generation is passing away and I hope that future generations never forget what was done to the Jewish people.  Of course, there is a Christian Holocaust going on right now in man parts of the world and it’s horrific how evil people can be to one another.  This movie illustrates this point well, even years later when a government in the wrong doesn’t want to admit their wicked past.

Becky and I really liked this movie and thought it was a don’t miss it for sure.  If you miss it at the theater, make sure you see it when it comes out to view at home.