Becky and I went to see I Love You Man last week with my sister Barbara O’Connor, at the Kerasotes theater in Castle Rock, CO. The Fandango website at I Love You Man describes the movie as follows.

“Engaged to the woman of his dreams yet uncomfortable with the prospect of not having a best man for his upcoming wedding, a successful real estate agent with no male friends schedules a series of “man dates” in hopes of finding a suitable candidate for the big day. Peter Klaven (Paul Rudd) is just like most other guys, only when it comes to making friends he’s always been a bit withdrawn. After proposing to his girlfriend, Zooey (Rashida Jones), however, Peter quickly realizes that he doesn’t even have any friends close enough to qualify for the role of best man.”

The Review
I Love You Man brings back Paul Rudd and Jason Segel together in this comedy about finding a “man friend”.  We saw them both in that stupid movie, Forgetting Sarah Marshall, where Paul was the surf instructor for Jason’s character who has lost his shallow girlfriend to a famous goofball.  We didn’t like that movie enough to write a review about it, so at least this one is getting a movie review.  Still, this movie wasn’t that good.

Becky and I both liked the actors in this flick, but the material isn’t that good.  There are some very funny parts in this movie, but once again the Hollywood gay agenda comes screaming at your again.  If you read between the lines on this and other films, people are born gay, but apparently everyone is gay and you can choose to be gay.  It’s really quite confusing for anyone who has half a brain since it makes no logical sense whatsoever.  Needless to say, it’s a distraction from the film.

There are also way too many crude jokes in the film that were not necessary and took away from the flick.  The premise was funny, but most of the comedy was oddball and stupid.

Between the three of us, we didn’t leave the film thinking it was worth the price of admission. 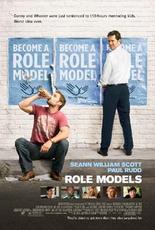 Becky and I went to see Role Models on Friday at the AMC theaters in Highlands Ranch, CO. The Fandango movie website at Role Models describes the movie as follows:

“Two salesmen trash a company truck on an energy drink-fueled bender. Upon their arrest, the court gives them a choice: do hard time or spend 150 service hours with a mentorship program. After one day with the kids, however, jail doesn�t look half bad…”

The Review
Role Models K-19: The Widowmaker movies stars Seann William Scott, best known from the movie American Pie and Paul Rudd. It’s a movie that is amazingly stupid, unrealistic and crude, but it’s very funny in parts. The characters are completely off-the-wall and goofy, but like American Pie and other zany comedy flicks, Role Models has some pretty funny scenes. Unfortunately, it’s out of control and definitely rated R for a reason. Don’t even think of taking your kids to this movie.

>I think I liked this movie more than Becky did, but it’s a comedy that you know you shouldn’t be laughing at some of the humor, but you can’t help yourself. It’s just too nuts at parts.

I think most people will find it offensive, so I can’t recommend it other than maybe as a rental. This way you can turn it off if you have trouble with the content.

I can’t say that I would want to see this movie again, but it should make for a good rental.