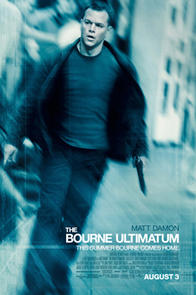 All he wanted was to disappear. Instead, Jason Bourne (Matt Damon) is now hunted by the people who made him what he is. Having lost his memory and the one person he loved, he is undeterred by the barrage of bullets and a new generation of highly-trained killers. Bourne has only one objective: to go back to the beginning and find out who he was. He must travel from Moscow, Paris, Madrid and London to Tangier and New York City as he continues his quest to find the real Jason Bourne—all the while trying to outmaneuver the scores of cops, federal officers and Interpol agents with him in their crosshairs.“

There are some parts of the film that were over the top, but the story and the movie are so well done and the characters are so compelling, that it’s easy to overlook the “yeah right.” factor. This is definitely the blockbuster of the Summer. A ton of fun that will keep you from going to the restroom or leaving the theater until the very end.
Becky and I definitely thought it was a Don’t Miss It.