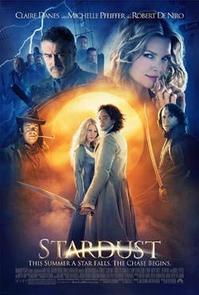 Becky and I went to see a sneak preview of Stardust on Thursday night at the Continental theater off of Hampden avenue in Englewood, Colorado. The Fandango website at Stardust describes the movie as follows:

“To win the heart of Victoria (Sienna Miller), a beautiful but cold object of his desire, a young man named Tristan (Charlie Cox) ventures into the realm of fairies to retrieve a fallen star. What Tristan finds, however, is not a chunk of space rock, but a striking girl named Yvaine (Claire Danes). However, Tristan is not the only one seeking the star. A king’s four sons need the star as they vie for the throne. Tristan must also overcome the evil witch Lamia (Michelle Pfeiffer), who needs the star to achieve eternal beauty. As Tristan sets out to protect the star and bring her back to his beloved, his journey will bring unforeseen romance, highflying adventure, and incredible encounters with a pirate captain, a shady trader, and an enchanted unicorn among other surprises. But if he can survive on his wits and the strength of his newfound love, Tristan will also uncover the secret to his own identity, and a fate beyond his wildest dreams.“

The Review
Stardust stars Claire Danes, Michelle Pfeiffer, Charlie Cox and Robert Deniro, so pretty much an all-star cast.  It’s a fantasy film about two worlds that are separated only by a small wall, but that are world’s apart in their attributes and about to collide.  A young man is from the natural world, but was born from a mother in the fantasy world and to win the love of a snobbish girl from the natural world that he is infatuated with he will leap the wall and bring her back a fallen star.  It’s a love story.

The story is very entertaining and lighthearted.  There are witches and flying lightning traders, ghosts and crazy princes with all the zany characters you would expect from a fantasy film.  The acting is great, especially by Charlie Cox, Claire Danes and Michelle Pfeiffer who gave awesome performances in this movie.  Robert Deniro was good too, but his character was too far over the top as a cross dressing, gay lightning bolt trader captain.  I thought that his character wrecked the film instead of helped it, even though he played the part well.  I understand in the book, his character was not gay, but apparently Hollywood needed to add that element for some reason.  Our kids wanted to see it, but it’s really a PG-13 movie for the violence and some of the humor.

As you might expect, I liked the film more than Becky did and we went to see it with her Mom and she liked it too.  Becky’s not really big into fantasy films, but I thought it was Worth The Trip while she would say it was a Rental.