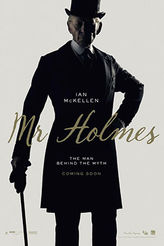 Becky and I went to see the new movie Mr. Holmes at the Regal Cinema in Englewood, CO.  The Fandango website at Mr. Holmes describes the movie as follows…

“Director Bill Condon puts a spin on Arthur Conan Doyle’s most celebrated character with Mr. Holmes, which stars Ian McKellen as the famous detective. The set-up is that a now-retired Holmes, his steel-trap mind starting to fade with old age, lives out his golden years in the late 1940s. He returns from a trip to Japan searching for a plant that could slow the aging process and help him regain the faculties he knows he’s lost….”

The Review:  This movie has a great deal of heart.  It’s a movie about the famous detective Sherlock Holmes as an old man, who is trying to figure out why he retired after a case that he can no longer remember.  As he is aging, his mind is slipping and he’s in search of a cure to keep his mind sharp as he grows older.  One solution that he come up with is to harvest Royal Jelly from bees as a bee keeper that he believes will help with his senility.

He travels to Japan in search of a tree that has been destroyed from the Atomic Bomb on Hiroshima that he believes will be even better than the Royal Jelly and in the process he meets a Japanese man who blames him for his father leaving him.  That is an interesting twist to the story and how Mr. Holmes responds to the man about his father.  The story is very well done and the acting is good, but it moves rather slow.  Almost too slow, much like an old man trying to solve a mystery.  The dynamic with Mr. Holmes a a young boy who has lost his Dad in the Great War made the film for me.

I liked the movie more than Becky did and the cinematography was fantastic.  I thought it was definitely worth the trip and Becky probably rated it as a Rental.