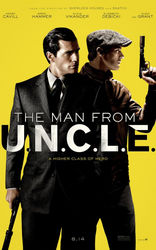 “Director Guy Ritchie brings the popular TV spy series to the big screen in this origin story. Set in the 1960s CIA agent Napoleon Solo (Henry Cavill) and KGB op Illya Kuryakin (Armie Hammer) pair up to stop an international criminal organization that is dealing in nuclear weapons and technology, which could upset the balance of power in the world…”

The Review:  The Man From U.N.C.L.E. takes place in the 1960’s with two spies going against one another in a bit like the Spy vs Spy comics of Mad Magazine.  In this movie, the have to team up to go after a diabolical mad woman who is dealing in nuclear weapons and wants to destroy the world.  The story is good, it is directed by Guy Ritchie and he does a good job with the film, except for in a few parts where he has the multi-screen effect that you would often see in 1970’s television shows that was annoying then and is more annoying today.  That part of the movie could have been left out for sure.

I liked Henry Cavill in this movie more than Armie Hammer simply because Armie’s Russian character seemed like he was “trying” to play the part, where Cavill being British played a pretentious snob of a spy much better.  He had no problem pulling off his character and you believed that the character Solo really was a British agent with an attitude, which was one of the things that was entertaining about the film.  There are plenty of cool classic cars and some great chase scenes, with plenty of action.  It seemed longer than it was though, which is just under two hours and we enjoyed all of the characters.

Unlike many of the spy movies that are incredibly far fetched these characters find themselves in situations that would be very difficult to overcome and they are able to do so using skills that are less than super human.  That’s one of the things that is refreshing about this movie is that it’s an action film without a bunch of hype. It’s good entertainment.

Becky and I both liked it enough to recommend it.  We thought it was Worth The Trip.