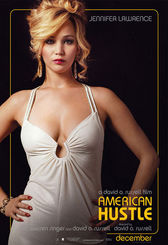 ‘‘A fictional film set in the alluring world of one of the most stunning scandals to rock our nation, American Hustle tells the story of brilliant con man Irving Rosenfeld (Christian Bale), who along with his equally cunning and seductive British partner Sydney Prosser (Amy Adams) is forced to work for a wild FBI agent Richie DiMaso (Bradley Cooper). DiMaso pushes them into a world of Jersey powerbrokers and mafia that’s as dangerous as it is enchanting. Jeremy Renner is Carmine Polito, the passionate, volatile, New Jersey political operator caught between the con-artists and Feds. Irving’s unpredictable wife Rosalyn (Jennifer Lawrence) could be the one to pull the thread that brings the entire world crashing down. Like David O. Russell’s previous films, American Hustle defies genre, hinging on raw emotion, and life and death stakes.“

The Review: Becky and I went to this movie without having any idea what to expect.  We saw the trailers and it looked to me like the movie was going to be terrible.  The story though and the script writing is so well done that you can’t help but like this movie. The characters are interesting and the acting is very good.  It’s about a couple of con-artists who get caught and are then trying to be used by the FBI.  The federal agent played by Bradley Cooper is really funny as he tries to make a name for himself by leveraging Amy Adams and Christian Bale’s characters.

We really liked this movie.  Right from the beginning it opens up with the main character spending all this time combing his hair, which was very strange, until you watch another character mess it all up.  This sort of thing happens throughout the movie with each person in the film trying to pull the wool over someone else because they are all a bunch of con-artists.  There is love, passion, whacky characters, mobsters, strange situations and yet it all comes together with several twists and turns.  Jennifer Lawrence character is hilarious because she is such a witch, yet smart in the way she plays her husband and other people in the film.

It’s one of the better films that is out right now, so if you can handle the language and a typical Rated R type film, you should like this movie.