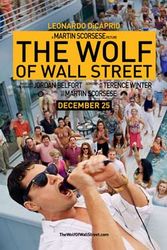 ‘‘In 1987, Jordan Belfort (Leonardo DiCaprio) takes an entry-level job at a Wall Street brokerage firm. By the early 1990s, while still in his 20s, Belfort founds his own firm, Stratton Oakmont. Together with his trusted lieutenant (Jonah Hill) and a merry band of brokers, Belfort makes a huge fortune by defrauding wealthy investors out of millions. However, while Belfort and his cronies partake in a hedonistic brew of sex, drugs and thrills, the SEC and the FBI close in on his empire of excess..”

The Review: Becky and I were both looking forward to seeing this movie.  After all, it stars Leonardo DiCaprio and is directed by Martin Scorsese, so we figured this would be a movie that could possibly win some awards for Best Picture.  Wow were we wrong!  This film is a journey into debauchery. We watched the characters do illegal drugs, have non-stop illicit sex with prostitutes and be fueled by greed and outright stupidity.  It’s based on a true story of Jordan Belfort, who goes from rags to riches to prison for insider trading. We watched his train wreck of a life for three hours glorify a salesperson turned con-artist, who quite frankly didn’t spend enough time in jail for his crimes.

I cannot believe that this film is getting such rave reviews?  Especially from liberals who pride themselves on defending the little guy.  Apparently they have no problem making a film that champions a person who was a first-class jerk in every area of his life.  He took advantage of his first wife, his second wife, all the people who worked for him and looked up to him, his children, he was addicted to drugs, addicted to sex, had zero self-control and they actually spent money to make a movie about this guy?  Why? Probably because he earned a million dollars a week breaking the law and stealing from people who didn’t have any money. People so desperate to give him their money, like they were buying an expensive lottery ticket in Penny Stocks. What he did initially was legal, but the drug of money turned him into a monster. The film did illustrate this very well.

Believe me, I could go on because this movie is depraved on many levels.  You will scratch your head asking how anyone could possibly do that many drugs and be that much of a sex addict and function in society. Let alone earn millions with a successful business.  I have no idea how they got an R rating and that this wasn’t NC-17, but they must have pulled some strings.

The bottom line is that this movie pretty much sucked.  I think the Critics are afraid to say it because of the star power and money power behind the film, but I’ll say it.  It was boring after a while and you just wanted it to end. I’ll be writing a review about American Hustle and that’s also about a con-artist, but the screenplay is good, the characters are not void of a soul and the directing of that film was far better.  If they were trying to make a point about greed, drugs and power, like The Great Gatsby, they should have made the film so that it could be shown in High School as an educational tool. I can’t believe they released this on Christmas Day, it should have been for Halloween.

If I were Jordan Belfort I would be hiding, ashamed to show my face in public because he’s a greedy psychopath according to this film.  The only really good thing about this movie is that Leonardo actually pulled off the character and the acting is very good, but other than that it was a waste of time.  Watching Jonah Hill chew out an employee and eat his pet goldfish is now considered entertainment?  Don’t bring your teenagers to this film because it gives the wrong impression that drugs and being a total mindless jerk in life will get you ahead.  Maybe in Hollywood where stupidity and a life of excess seems to reign supreme?  I watched a number of people get up and leave the theater and I was tempted to leave numerous times.

You can skip this movie, unless you want to take a trip into the whacky world of a crazy con-man. Here’s a good article on the real story behind this movie that is worth reading – An Open Letter to the Makers of The Wolf of Wall Street, and the Wolf Himself