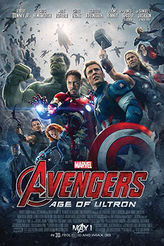 “This sequel to the smash-hit comic-book epic The Avengers finds the iconic superhero team dealing with a threat of their own making: a sentient robot called Ultron (voice of James Spader), who was originally designed as part of a peacekeeping program. Since the events of the last film, Captain America (Chris Evans), Iron Man (Robert Downey Jr.), the Hulk (Mark Ruffalo), Thor (Chris Hemsworth), Hawkeye (Jeremy Renner), and Black Widow (Scarlett Johansson) have been working to take down various cells of a secret society of villains known as HYDRA. Their zeal to make the world a better, safer place inspires Tony Stark, genius billionaire and alter ego of Iron Man, to create Ultron in order to respond to additional threats that the Avengers aren’t able to handle…”

The Review: Corban and I were excited to see this latest Avengers film and it was a sold out theater.  This Marvel Comic Book series has been wildly successful with serious star power and the stories are usually pretty good, much like reading a comic book. The villains are always over the top and more powerful than any one or even multiple of the Avengers, but for some reason they are far too easy to defeat.

In this film, there were a few things that I found that really annoyed me.  The first being is that Iron Man is indestructible, but his robot creations are easy to destroy that made absolutely no sense.  The second thing that was very disconcerting for me was one a new creation by Tony Stark and company as a super hero called himself “I AM”, which was the name that God Himself told Moses that He was and I found to be way beyond ridiculous.  I’m amazed nobody caught that when editing the film and the writers obviously put it in as a slam or joke on God or at the very least Christians, Jews and Muslims.

The movie overall was not that great though.  It had plenty of great special effects and a great deal of action.  They threw a bit too much drama into this one between the characters and it was boring at times.  We both liked it, but we didn’t love it.