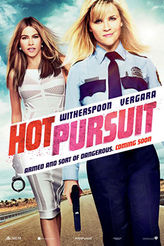 We went to see the new movie Hot Pursuit this weekend at the AMC theater in Castle Rock, CO with our friends Hope and Chris. The Fandango website at Hot Pursuit describes the movie as follows…

The Review: This is an oddball comedy that is very similar to the movie The Heat with Sandra Bullock and Melissa McCarthy.  The jokes and situations were almost the same as that film and it was about on the same level for entertainment, so it was funny at times.  There are some good laughs, but it’s very predictable and goofy.  The acting was okay and the story was pretty good, it was a bit different than expected.  The main characters worked well together and there were not a great deal of plot twists.

The movie should do well at the box office because of the Witherspoon and Vergara, but it was really more of a rental than one you want to take the time to go and see at the box office.  It just wasn’t that great of a movie, but it does have some good laughs.  We liked it overall, but would suggest you wait to rent it or for it to come out on Netflix.