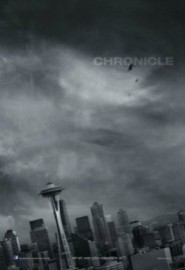 Becky and I took our kids to see the new flick Chronicle today at the AMC Theaters in Castle Rock, CO.  The MovieFone website at Chronicle describes the movie as follows…

“There is no description for this film, which should have been the warning to us not to see it…”

Chronicle has been getting rave reviews by fans and critics alike, where on Rotten Tomatoes it had a really high score as a great flick.  It’s about these three High School kids who stumble upon this whole in the ground, while they are at a party.  They climb down the hole, move down a a cavern and discover an alien craft of some type.  After they touch the craft they soon learn that they have amazing telekinesis powers.

One of the teenagers is a very troubled kid, who has been abused at home and everywhere else.  His powers continue to grow and he realizes that he doesn’t have to be abused anymore, but instead he can become the “Apex Predator”.  The movie goes down hill from there.

It’s one of these reality movies where the film is mainly filmed through the crazy kid’s camcorder as he chronicles his life as a super hero, but he’s not a hero – he’s a villain out for revenge.  The movie poster for this film is better than the movie.  In fact, I would probably buy the movie poster, it’s really cool looking.

We all disliked this movie.  Conroy said it was going to be stupid going into it, so I didn’t hear the end of it after the movie.  Becky wanted to get up and leave and Corban and Bianca both were mad that I “made them see it” (Dad of the year).   Okay, so this movie was really bad, so don’t waste your money or your time.  It’s not even a good rental, but is a total waste of time.  Maybe if you’re a comic book fan and you want to see how a hero or a villain can arise, but it’s not worth the time involved in watching it.