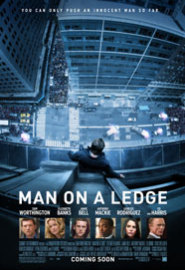 Becky and I took our two boys Conroy and Corban to see the flick Man on a Ledge last Weekend at the AMC Theaters in Castle Rock, CO. The MovieFone website at  Man on a Ledge describes the movie as follows…

“In the heart-pounding thriller ‘Man on a Ledge’, Nick Cassidy (Sam Worthington) makes a desperate and life-threatening move to prove his innocence after he is framed for the theft of a rare, prized diamond…”

Man on a Ledge has not done very well at the Box Office since the movie critics apparently didn’t like this film.  However, they liked The Grey that was terrible, so don’t believe the professional movie critics about this movie because it delivers.  Man on a Ledge is a really cool flick about more than just a guy stuck on a ledge.  We went into the movie with very low expectations, but came out totally surprised and really enjoyed it.

It’s about a police officer who has been framed by a powerful guy who runs the city for stealing a rare diamond.  He escapes from prison at the beginning of the movie and the excitement really starts when he goes out on a ledge and brings people from all over the city to see whether or not he’s going to jump to his death.  Everyone knows who he is because it was such a high-profile case, but there are people who want him dead, including some of the police.  There is plenty of action, suspense and excitement with a great story to go along with it.  I don’t want to tell you too much about the movie, but it was a great thriller.

We all liked this movie and I thought it was definitely worth the trip to the theater and three out of four of us rated it as a Don’t Miss It, so if you like action thrillers, you should go check this one out.