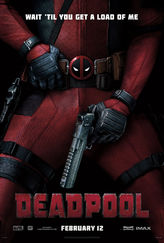 Becky and I went to see the movie Deadpool at the AMC Theaters in Highlands Ranch, CO last week.  The Fandango website at Deadpool describes the movie as follows…

“In this irreverent spin on the superhero genre, mercenary Wade Wilson (Ryan Reynolds) agrees to participate in a top-secret experiment after learning that he has terminal cancer. When the procedure leaves him with advanced healing powers and a disfigured face, he reinvents himself as a wisecracking, spandex-clad antihero known as Deadpool, and seeks revenge on those responsible…”

The Review:  Deadpool is a crazy undead comic book character that makes fun of other comic book heros as he goes on a quest to get vengeance on the person who turned him into an undead.  His life has been destroyed after discovering that he had incurable cancer and signs up to get fixed by a secret organization that creates mutants.  He ends up having a falling out with the company that has agreed to give him mutant powers and the movie is a wild ride into his personal vendetta.

Ryan Reynolds plays the Deadpool character and he is really great in this role.  This movie is extremely violent with plenty of sex, bad language and violence, but it works for this film.  It’s definitely rated R and it’s not your typical Marvel film by any stretch that are mainly PG-13.  It’s much more like Daredevil on Netflix that is really violent and at times completely over-the-top.  Nevertheless, it is extremely well done and fun to watch, if you can get past the extreme violence.  I actually saw this film twice and I liked it both times, but I expected the violence.  The second time we went with our friends Mark and Maria and Mark liked it, but Maria didn’t like it as much.

Becky and I both liked it and I thought it was a Don’t Miss It, but I don’t expect everyone to like it.