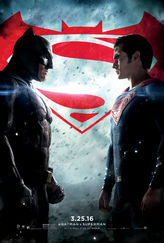 “Batman (Ben Affleck) and Superman (Henry Cavill) clash over differing philosophies about what kind of heroism is needed to protect the world, while the public they’re defending is becoming increasingly mindful of the damage that superheroes and masked vigilantes cause. However, the duo are soon forced to confront an even greater threat created by nefarious billionaire Lex Luthor (Jesse Eisenberg). Directed by Zack Snyder…”

The Review:  Batman vs Superman: Dawn of Justice looked like it was going to be terrible.  We actually laughed about it when we saw the Previews and I was not thrilled about Ben Affleck replacing Christian Bale as Batman after the success of the Batman series, while still keeping Henry Cavill as Superman.  It turned out that was the main shortcoming of this movie, but Ben Affleck still did a good job as Batman.  The story and the film was actually really well done and the characters were entertaining.

This is a movie that is about entertainment.  Batman and Superman are not real life people, so the critics have been bashing the film as though this genre is real or something.  It doesn’t make any sense since the people and the places are not real, it’s a comic book story and it delivers as an entertaining film.  We went with our son Corban and his friend Logan, who is an avid comic book junkie and they both really liked it.  The movie introduces Wonder Woman as well as the character Doom as the ultimate villain for the three super hero’s.

Becky and I both liked it to and thought it was a Don’t Miss It..