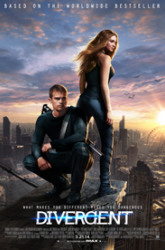 Becky and I went with Corban and Conroy to see the new movie Divergent this week at the AMC theaters in Lone Tree, CO. The Moviefone website at Divergent describes the movie as follows…

“Set in a world where people are divided into distinct factions based on human virtues, Tris Prior is warned she is Divergent and will never fit into any one group. When she discovers a conspiracy by a faction leader to destroy all Divergents, Tris must learn to trust in the mysterious Four and together they must find out what makes being Divergent so dangerous before it’s too late.”

The Review:  Divergent is based on a popular book series, which are always a hit or a miss.  Eragon for example was a really popular book, but the film was nothing like the book and the movie was terrible.  The Seventh Son is coming out based on The Last Apprentice series here in United States and it doesn’t look anything like the book series.  I have read all of the books and the trailer looks like it’s not even close to the book series, so there should be many disappointed fans.  The Hunger Games was done well and The Lord of the Rings series and The Hobbit are probably the best movies ever made from a fantasy book that the readers could feel really good about, even with a few of its shortcomings.  The Harry Potter series was another one that was great, even if you never read the books. Divergent is very well done, like Hunger Games.  It’s a bit like The Hunger Games with a futuristic world after the coming Apocalypse.

Divergent is a bit of a strange science fiction flick.  It is pretty well done and entertaining that kept our interest from beginning to end.  It’s a bit like Harry Potter in that there are five different classes of people in this world of the future, which reminded us of having the different groups of wizards at the Hogwarts school.  There is also the unlikely hero, in this case a young woman, who doesn’t fit into any one of the groups of people.  She is trained in combat skills by one of the groups that are designed to protect this strange modern society.  However, if it is found out that she is a Divergent, which is someone who doesn’t fit in because of her advanced skills, she will be eliminated by the group that she has joined to protect this modern society.

The movie has plenty of action, drama and suspense.  It kept our interest and it’s somewhat like a cross between Harry Potter and The Hunger Games, which you’ve figured out by now.  If you liked those movies, than you will probably like this film with several plot twists and unique characters.  It’s entertaining, but a bit disturbing to think that what the future would be like after a nuclear holocaust based on the sinful nature of mankind.  Utopia will always have a flaw because of the pursuit of power and greed, which is what this movie shows quite well.

We all liked this movie and it was worth the trip.