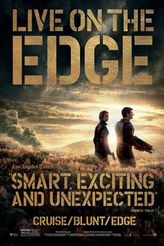 “Tom Cruise stars as a futuristic soldier who is killed during a battle with alien invaders, and lives out the last day of his life over and over again in director Doug Liman‘s adaptation of the popular Manga All You Need is Kill. In the not-too-distant future, a ferocious race of aliens dubbed “Mimics” have descended from the stars to stake their claim on Earth. Five years after arriving, they’re poised to claim Europe…“

The Review:  Tom Cruise has done some great movies and some really bad films.  He is a bit whacked with his Scientology beliefs, so many people don’t like to support his films, but if you like science fiction movies this is one to go and see.  It’s extremely well done with a sold story, good acting and a pretty different movie.  However, Becky thought she was watching Groundhog Day for a while that she thought was a little too annoying.  She still liked it though.

The story is pretty wild.  Mankind is being eliminated by an alien race and they need a way to defeat the aliens that have the ability to control time.  The point is made that if you can control time than you can be unstoppable and it gets really interesting from that standpoint.  I really liked this movie and thought it was super cool.  I would watch it again.

We both liked it and found it entertaining, but I liked it more than Becky.  If you like science fiction movies you should put this one on your list for sure.