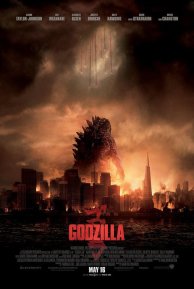 Becky and I went to see Godzilla a couple of weeks ago at the Regal theaters in Lone Tree, CO last week.  The MovieFone website at Godzilla describes the movie as follows…

“Ford Brody (Aaron Taylor-Johnson), a Navy bomb expert, has just reunited with his family in San Francisco when he is forced to go to Japan to help his estranged father, Joe (Bryan Cranston). Soon, both men are swept up in an escalating crisis when Godzilla, King of the Monsters, arises from the sea to combat malevolent adversaries that threaten the survival of humanity. The creatures leave colossal destruction in their wake, as they make their way toward their final battleground: San Francisco.”

The Review:  Godzilla is the remake of the classic and poorly made Japanese Godzilla films, but they had already done one before with Matthew Broderick in 1998 that was terrible.  This new version wasn’t as bad as that film, although they killed off the main character really early in the film that kind of wrecked it.  The monsters reminded me of one of the old Japanese type films where Godzilla ends up being a good monster to protect the planet, but it’s a pretty goofy flick overall.

If you are a Godzilla and science fiction fan than you will probably like this movie.  At least it starts in Japan, which is where you would expect the giant lizard to show up based on the history of the character.  The acting is pretty good, the story isn’t terrible, but it’s Godzilla so what do you expect?  A giant monster comes up out of the deep and starts wiping out a city and you have Godzilla and usually there are other monsters that he battles to save Tokyo.  That pretty much sums up this movie,

We both liked it and found it entertaining, but some of the kids liked it more than others.  Conroy thought it was pretty good, but he and I both thought it would be better.  Bianca though it was okay and Corban didn’t  see it.