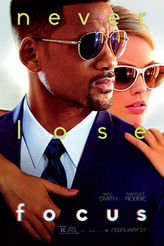 Becky and I went to see the new movie Focus last weekend in Phoenix, AZ on Saturday night with our friends Mark and Maria. The Fandango website at Focus describes the movie as follows…

“Nicky has studied the science of human nature his whole life, and understands precisely how to earn anyone’s trust, or fool them into never noticing he’s stealing their watch, or wallet, or anything they might have that Nicky can sell. In the movie’s opening sequence, he’s eating at a New York restaurant when the gorgeous Jess approaches his table and asks him to pretend to be her boyfriend so that she can avoid a particularly determined guy at the bar who won’t stop hitting on her. The two of them hit it off, but he quickly figures out that she’s running a scam on him and soon turns the tables on her and her partner. Undaunted, Jess begs Nicky to teach her what he knows about the criminal life, and he brings her in on a plan to steal from as many people as possible during Super Bowl week in New Orleans. She turns out to be a natural, and quickly learns the ropes of this unscrupulous world…”

The Review: We haven’t seen Will Smith in a good movie in a while, but this one looked pretty interesting.  It was a bit of a different flick with Margot Robbie starring as a girl who wants to be a con-artist like Will Smith’s character.  He happens to be the best in the business and his job requires focus, hence the name of the movie.  There are quite a few plot twists in this movie and it has a good story as well.  However, it’s also pretty far fetched at times, especially when both character end up at the same location three years later for different reasons.

Even though there are some shortcomings in this movie it is entertaining.  The film is well done and we all liked it.  It’s not a great flick that is going to win any awards, but it was worth the trip.