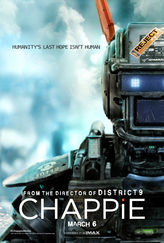 Becky and I went to see the new movie CHAPPiE today at the Regal Cinemas in Lone Tree, CO with Corban and Bianca. The Fandango website at CHAPPiE describes the movie as follows…

“Neill Blomkamp (District 9, Elysium) expands on his 2003 short film Tetra Val in this futuristic sci-fi saga written in collaboration with screenwriter Terri Tatchell (who previously worked with Blomkamp on the screenplay for District 9), centering on the story of a police robot named Chappie, who develops the ability to think and feel for himself. As people fight back against the mechanized police force, sinister forces seek to capture Chappie for their nefarious purposes. ~ Jason Buchanan, Rovi…”

The Review: We had seen the previews for this movie for quite a while, but we are not quite sure if it would be any good.  The movie looked a bit stupid, but it was much better than we expected.  It could be because we had low expectations, but it was really well done.  The robot character was really well done and the story was good with excellent acting.  The story asks the question on what would happen if a robot was granted consciousness like a human being and what the result would be.  Would mankind accept such a being or try to destroy it.

The movie is strange and is extremely violent.  It’s like a science fiction action movie and it was done by the people who did District 9 about the aliens, which Becky and I thought was really stupid.  This film is much better and is very interesting from a moral and spiritual sense based on what people believe to be true or not.  I think that Pastor’s should definitely see this film because it deals with what is consciousness and are we as human beings anything more than a computer program?  Personally, I do not believe so because I believe that man is a spirit, soul and body and not just a body and a soul.  However, there are many who disagree with my view and their views fall much more in line with what this movie presents.

Becky didn’t like it very much, but she is not a fan of science fiction and it was very violent and the language is harsh.  Corban and I both liked it and Bianca was with Becky on this one and we didn’t know it was Rated R when we went into it, so be forewarned.