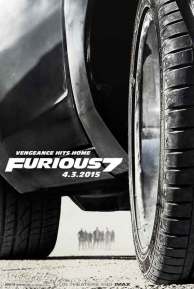 Becky and I went to see the new movie Furious 7 on opening Weekend at the AMC Theater in Castle Rock, CO.  The MovieFone website at Furious 7 describes the movie as follows…

The Review: Becky and I saw the first six of these films and this was the most ridiculous of them all as far as being far fetched.  There are some great vehicles in the film, plenty of car chases and extreme action. It’s a bit like a super hero film since what the characters pull off is impossible.  All of the characters have super human like abilities and some of the stunts are over the top, but it’s still very entertaining.

At the end of the film they had an incredible tribute to Paul Walker that definitely made it worth seeing the movie.  I really liked it and thought that it was worth the trip.  Becky liked it too, but it was really far-fetched that bugged her a little too much.