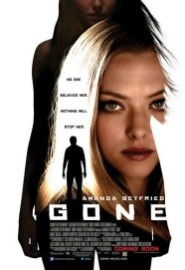 Becky is out of town this Weekend, so I took the kids to see Gone at the Regal Cinemas in Lone Tree, CO.  The MovieFone website at Gone describes the movie as follows…

“In the chilling suspense thriller ‘Gone,’ Jill Parrish (Amanda Seyfried) comes home from a night shift to discover her sister Molly has been abducted. Jill, having escaped from a kidnapping a year before, is convinced that the same serial killer has come back and taken Molly. Since the killer leaves no trace, the police don’t have any evidence and can’t help her. Afraid that Molly will be dead by sunrise, Jill sets out alone on a nail-biting chase to come face-to-face with the killer. Will she have enough time to find and outwit him, expose his secrets and save her sister?”

The Review
Gone was a movie that definitely has made me believe that the movie reviews at www.rottentomatoes.com are worthless.  They gave this movie a rating of 14% rotten and in the meantime they loved the flick Chronicle that was terrible.  Gone was a very good thriller and kept us on the edge of our seat with the story and the characters.  It has excitement, suspense and action with lots of drama from beginning to end.  The movie is very well done and delivers on just what it promises as an exciting thriller with a surprise ending.

Amanda Seyfried was good in this film and her character was believable, but she did seem a bit nuts and lied way too much throughout the movie.  The story is disturbing because it is about a serial killer and the girl who gets away from his clutches, but nobody believes her story.  Even though there are missing girls all over Portland, OR where the story takes place and the police are not doing anything to find them.

Anyway, she’s committed to a hospital as being crazy and when she is released her sister moves in with her to help her stop re-creating her nightmare.  Then her sister turns up gone one day when she comes home from working a night shift, hence the name of the film.

The biggest flaw of this film is that it didn’t spend enough time showing enough of her past, beyond her actual abduction, but kind of glossed over her time in the hospital and dealing with the event.  The Director used dialogue from a police officer in the film discussing her past to let you know what happened with a quick flashback.  I think they should have started the film in the hospital with her being pumped with drugs as a crazy person and built from her being released from the hospital to make it a much more powerful film.  The audience would have wondered then if she was actually abducted or a total nut.

In spite of the short comings, we all liked the movie and thought it was worth seeing.  It’s definitely PG-13 though, so be aware of that fact when you go to see it.