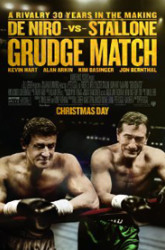 Becky and I went to see Grudge Match at the AMC Theaters in Castle Rock, CO with Corban last week. The MovieFone website at Grudge Match describes the movie as follows…

‘‘Two retired boxers (Sylvester Stallone and Robert De Niro) decide to settle a long-standing beef by heading back into the ring in this sports comedy from director Peter Segal. Back in the day, Billy “The Kid” McDonnen (De Niro) and Henry “Razor” Sharp (Stallone) were the two biggest bruisers in the Pittsburgh boxing scene. Their fierce rivalry drawing nationwide attention, Razor and The Kid were deadlocked for the title of overall champion when the former announced his retirement just before the decisive 1983 match that would have determined the supreme champion. Three decades later, enterprising boxing promoter Dante Slate Jr. (Kevin Hart) lures the aging pugilists back into the ring for the fight that everyone has been waiting for. Meanwhile, when Razor and The Kid see each other for the first time in 30 years, the cameras are rolling as tempers suddenly flare. In no time that unscheduled scuffle goes viral, prompting both fighters to resume their intensive training in a bid to be the one who delivers the knockout blow during the highly anticipated bout. Alan Arkin, Kim Basinger, and Jon Bernthal costar.“

The Review: Becky and I talked Corban into seeing this movie with us.  The story is not a terrible idea, but we’re talking about a movie about a couple of old boxing rivals that is starring Sylester Stallone who is 67 years old and Robert De Niro who is 70 years of age.  It was just too far fetched to take serious even though it was pretty funny at times.  Kim Basinger looks really good at age 60 and I’m surprised we’re not seeing her in more movies because she has aged so well.

For what it’s worth, De Niro and Stallone do a good job of pulling off their characters and they both look good for their age.  It looks like they both got in pretty good shape for the film, which is hard to do at their age when you’re fighting gravity and muscle atrophy.  The taking of God’s name in vain was disturbing, along with the other foul language.  The language definitely took away from the movie and it wasn’t necessary.  Still the story was pretty good, but I think they should have used younger actors.  Of course, part of the comedy though for the film is that it’s Rocky facing Raging Bull.  That was evident to me in the movie and was part of the comedy for the film.  Alan Arkin was funny too, along with Kevin Hart that both pulled off their respective characters.

It was just too hard to take serious though and they should have put some of the outtakes, like with Holyfield and Tyson at the end of the movie, into the film.  I think they could have done a much better job in this movie.  It wasn’t he fault of the actors, but I think the screenplay needed some work and Peter Segal could have done much better Directing this film.  After all, Get Smart was a very funny film and this was only moderately funny.

Becky and I probably liked it better than Corban, but not by much.  We would suggest waiting for the rental rack for this one and Corban thought it was a waste of his time.  Which isn’t good news when a 14 year old thinks he wasted his time watching your movie.