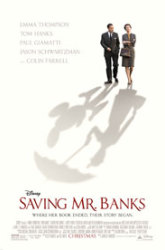 When Walt Disney’s daughters begged him to make a movie of their favorite book, P.L. Travers’ “Mary Poppins,” he made them a promise-one that he didn’t realize would take 20 years to keep. In his quest to obtain the rights, Walt comes up against a curmudgeonly, uncompromising writer who has absolutely no intention of letting her beloved magical nanny get mauled by the Hollywood machine. But, as the books stop selling and money grows short, Travers reluctantly agrees to go to Los Angeles to hear Disney’s plans for the adaptation...”

The Review: Saving Mr. Banks was not on my list of vehicles to see this year.  I figured I would wait and see it on Netflix or as a rental sometime down the road.  In fact, Conroy and I were planning on going to see the Hobbit again since it was only $5 to get in on Sunday night at this theater, but it was sold out.  Becky and Bianca were going to see Saving Mr. Banks and since our movie was sold out we decided to go and see this movie with them.  It turned out to be a great choice.

If you’ve ever seen Mary Poppins, and who hasn’t, then you should go and see this movie as it tells the story of how Walt Disney ended up making the film after a twenty year pursuit of the author of the book.  The characters in this film and the acting is fantastic.  This is a movie with heart.  Emma Thompson is amazing in this movie and so is Tom Hanks playing Walt Disney, but really all the acting is fantastic.  It is a film that contains a story within the story within the story of Mary Poppins itself.

This movie is so well done and it does a great job of making you feel uncomfortable at times, while also getting you to fall in love with the characters.  You will empathize with the main characters as they struggle with both giving up and creating Mary Poppins to be their own.  It’s really incredible that Walt Disney was such a persistent person in keeping his word to his children that he wanted to make certain that Mary Poppins came to life on the big screen.  The movie made me want to read the book Mary Poppins because the film is so well done.

I would say this movie is a Don’t Miss It for sure because it is so well done and Becky agreed with me.  Conroy and Bianca both liked it too.