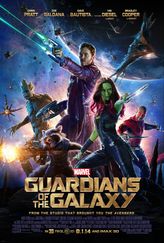 “Marvel Studios expands their cosmic presence on the big screen with this adaptation of the Guardians of the Galaxy comic series, with Zero Dark Thirty‘sChris Pratt heading up a cast that includes David Bautista and Zoe Saldana.Super‘s James Gunn helms the big-budget sci-fi film. ~ Jeremy Wheeler, Rovi“

The Review:  Guardians of The Galaxy is one of the reasons why I enjoy going to the movies.  This movie is funny, has a great story, is exciting and includes plenty of action.  It’s just a really fun movie for the whole family.  The acting is good and the characters are very cool.  If you’re a fan of science fiction and Marvel comic films than you should really like this movie.  I really haven’t spoken with anyone who hasn’t liked it yet.

This movie is a block buster and it’s doing very well at the Box Office.  It’s about a young boy who gets taken by aliens when he’s a kid to another part of the galaxy to be raised by aliens that are rogue alien bad guys.  He ends up becoming a thief and misfit that teams up with some other angry alien misfits that end up having to save the galaxy from destruction.  The movie is very strange and funny.  It feels like a comic book and that’s what makes it such a good movie.

We all liked it and found it entertaining.  Conroy ended up seeing it twice and I could probably see it again.