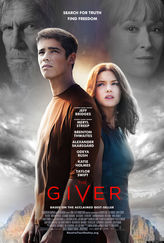 Becky and I went to see The Giver last week at the AMC theaters in Castle Rock, CO.  The Fandango website at The Giver  describes the movie as follows…

“A young man living in a future where complacency is valued above all else discovers the sinister secrets that hold his fragile society together after being selected to become the Receiver of Memory in this adaptation of author Lois Lowry’s Newbery Medal-winning young-adult novel. Jonas (Brenton Thwaites) was raised to believe that conformity is the key to contentment. The society Jonas lives in is a peaceful one, in large part because their collective memories have been entrusted to the Giver (Jeff Bridges).…“

The Review:  The Giver is a trip!  This movie takes you into a future where society decides what you will become, there is no free will anymore and the State even controls your memories and what you know.  As would be expected, everything is really a lie because Communism doesn’t really work, just ask the millions of people who grew up and died under Joseph Stalin.  The Giver provides a much more sterile and peaceful world that seems very serene and nice, but appearances are not what they seem to be.

The story is really good and the acting is great.  It’s strange because most of the film is in black and white since this society doesn’t want people to see in color.  It is probably how the future will actually be with the number of whacko’s we have running the governments of the world today and wanting to control the lives of people more and more.  This movie is very well done.  It’s entertaining and fascinating.  It’s not a great film, but it’s done well and enjoyable as a science fiction film.

I know it was good because Becky doesn’t like science fiction films, but she liked this one.  She liked Divergent too though.  I think she really liked how organized and clean this futuristic society in The Giver was and she probably would have fit right in like Katie Holmes.  I would have definitely rebelled against it.  We both liked it and thought it was worth going to see on the big screen.