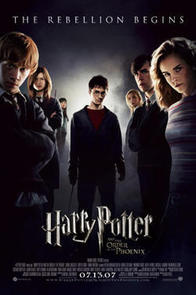 I took the boys to see the new Harry Potter film at the Colorado Cinemas in Castle Rock, Colorado on Saturday. The Fandango website at Harry Potter and the Order of the Phoenix describes the movie as follows:

“Harry Potter returns for his fifth year at Hogwarts and discovers much of the wizarding community has been denied the truth about his recent encounter with Lord Voldemort. Minister for Magic Cornelius Fudge appoints Professor Dolores Umbridge the infamous position of Defense against the Dark Arts teacher…seemingly leaving the young witches and wizards to fend for themselves. Harry takes matters into his own hands and secretly forms a self-proclaimed group of students, “Dumbledore’s Army,” prepping them for the extraordinary battle that lies ahead.“

The Review
Harry Potter and the Order of the Phoenix is the fifth installment of the Harry Potter series and Harry and his friends are definitely growing up. I couldn’t get Becky to see this one since she is anything but a Harry Potter fan and Bianca had no interest either, so it was off to the movies with Conroy, Corban and Conroy’s friend Connor along with his Dad, neither of which had ever seen a Harry Potter movie.

I was surprised at the end that they both liked it and said that even though they hadn’t seen any of the previous films they could still follow along. I definitely didn’t expect that with this movie since it builds up from the other four previous films and isn’t that easy to follow.

Does this movie deliver? Yes and No. The kids loved it and definitely thought it was a “Don’t Miss It”, but I was a bit tired of the dark wizard trying to whack Harry Potter. I think he needs to see Anthony Robbins or a motivational speaker for wizards, so that he can achieve his goal, instead of being foiled once again by the misfit Potter kid with the lightning bolt on his head. It’s a bit tragic for the evil foe, kind of like a Rocky and Bullwinkle episode with Boris and Natasha.

The special effects were great as always. Another strange teacher who is up to no good at Hogwarts has joined the school for a Season causing trouble for the kids and giving Lord Voldemort easy access to the children. It ends with the audience wanting more to happen, but it was still worth seeing if you’re a Harry Potter fan. I would say that it’s a bit like going on the small roller coaster ride at the amusement park and having to get back in line for a second trip.

Hopefully, they will make all of the books into movies and eventually bring this film series to a conclusion before Harry Potter has gray hair and his pal Hermione is married with children.