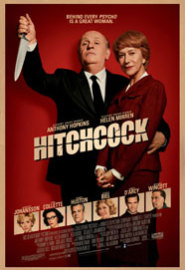 Becky and I went to see the new movie Hitchcock at the AMC Cinemas in Highlands Ranch, CO last night.  The MovieFone website at Hitchcock describes the movie as follows…

“‘Hitchcock’ is a love story about one of the most influential filmmakers of the last century, Alfred Hitchcock and his wife and partner Alma Reville. The film takes place during the making of Hitchcock’s seminal movie ‘Psycho’..”

The Review: Hitchcock is a strange film starring Anthony Hopkins as the famous Director Alfred Hitchcock, the brains behind Psycho, one of the most famous horror films of all time.  It’s not really about the movie, but about the making of the film and the relationship between Alfred and his wife Alma, along with the challenges they faced in trying to get Psycho produced.

The movie is interesting.  It’s not an action film, but a well done drama that takes you partially through the real life story of the mass murderer that the film Psycho is made from and difficulty in getting the original film made.  It moves rather slow at times, but if you’re a movie fan and an Alfred Hitchcock fan than you should like the film.  We both liked it and thought it was a fascinating tale about an American movie icon.

I don’t know if I can rate the movie as being Worth The Trip, I would say it’s a very good Rental for sure.  Becky thought it was Worth The Trip, but it’s not going to appeal to everyone for sure.