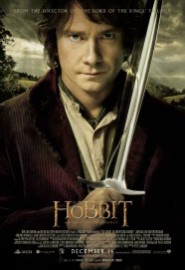 I took our three kids Conroy, Corban and Bianca to see the new movie The Hobbit at the AMC theaters in Castle Rock, CO on the Midnight showing on opening night.  The MovieFone website at The Hobbit: An Unexpected Journey describes the movie as follows…

“The adventure follows the journey of title character Bilbo Baggins, who is swept into an epic quest to reclaim the lost Dwarf Kingdom of Erebor from the fearsome dragon Smaug. Approached out of the blue by the wizard Gandalf the Grey, Bilbo finds himself joining a company of thirteen dwarves led by the legendary warrior, Thorin Oakenshield. Their journey will take them into the Wild; through treacherous lands swarming with Goblins and Orcs, deadly Wargs and Sorcerers. Although their goal lies to the East and the wastelands of the Lonely Mountain, first they must escape the goblin tunnels, where Bilbo meets the creature that will change his life forever…Gollum. Here, alone with Gollum, on the shores of an underground lake, the unassuming Bilbo Baggins not only discovers depths of ingenuity and courage that surprise even him, he also gains possession of Gollum’s “precious” ring that holds unexpected and useful qualities… A simple, gold ring that is tied to the fate of all Middle-earth in ways Bilbo cannot begin to know.”

The Review: The Hobbit: An Unexpected Journey is the much anticipated Peter Jackson film based on the book The Hobbit and the beginning of The Lord of The Rings series.  The story is about Bilbo Baggins and his journey with a group of Dwarves in search of their homeland that was destroyed and taken over by a powerful dragon.

This movie is very well done and is much like The Lord of The Rings trilogy, so if you liked that film, you should really like this movie.  Conroy said he liked it better than The Lord of the Rings, which was his favorite movie series.  I thought it was great too!  I don’t know if I liked it better than the other three films, but definitely just as much and there are many of the same characters in this movie.  Corban and Bianca both thought it was great too.

If you have read the book or seen the other movies, you’ll like this film.  Peter Jackson has done such a great job on this movie and the same as the other Middle Earth movies.  It’s really simple to review this movie.  If you’re a fan of the previous movies, this is a Don’t Miss It.  If you’re not a fan of The Lord of the Rings, then you will want to skip this one.