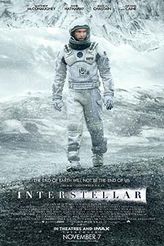 Becky and I went to see the film Interstellar last week at the Regal Cinemas in Lone Tree, CO.  The Fandango website at Interstellar describes the movie as follows…

“A crew of astronauts embark on a mission to find a world where humanity can trive in a future where Earth can no longer sustain human life. The story opens on Earth in the distant future, as Mother Nature is waging war on humanity. Famine is widespread, and all of mankind’s resources are now dedicated to farming in a desperate fight for survival. A former NASA pilot and engineer named Cooper (Matthew McConaughey) has become a homesteader in order to support his teenage son Tom (Timothee Chalamet) and 10-year-old daughter Murph (Mackenzie Foy). Unfortunately, even that begins to look like a futile endeavor after a sandstorm ravages their close-knit community…”

The Review: I thought this movie was going to be really terrible.  I wasn’t looking forward to seeing it and neither was Becky with a downer story about how mankind has destroyed the Earth and we would need to find another planet to survive as a species.  In some respects it was really bad because of that, but it was much better than we both expected.  It has some cool scenes from outer space and shows how mankind desires to “boldly go where no man has gone before.”

The story deals with how mankind has destroyed the planet and in order to save our species (that always crack me up because we are not animals like the Evolutionist wants us to be), but nevertheless we need to save mankind in this film by going to a new planet.  There are also some aspects of the film that show the evil of man’s nature, including greed and self absorption.  That makes the movie interesting and I really liked the way they used Time as an important element in this film.  In fact, that’s one of my favorite parts of the movie because very seldom do astrophysicists discuss the reality that when they look into the void of space they are looking into the past.

They also deal with Einstein’s theory of relativity in action with the main character when they land on a planet based on the rotation of the planet.  That was pretty cool.  I liked the movie more than Becky did.  The acting was good and the characters were interesting.