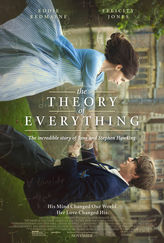 “James Marsh’s biopic of the celebrated scientist Stephen Hawking, The Theory of Everything, stars Eddie Redmayne as the famous figure. Enrolled as a graduate student at Cambridge, Hawking establishes himself as one of the leading minds of his generation, and begins to win the heart of Jane (Felicity Jones). After one of his earliest breakthroughs, Hawking is diagnosed with ALS, and he becomes less and less able to control his own body. With the loyal Jane at his side, he continues his work. However, as the years progress, Jane starts to feel more like a nurse than a wife, and Hawking begins to have feelings for a woman who is hired to care for him. The Theory of Everything screened at the 2014 Toronto International Film Festival. ~ Perry Seibert, Rovi…”

The Review: This film has been a big hit with the critics and at the box office as the amazing story of the life of Stephen Hawking.  We had great expectations for this film not knowing anything about his life, but we did not find it as good as everyone else did.  For starters the great Stephen Hawking was not just an atheist, but someone who continually confronted people who believed in God as though they were stupid and he was smarter than God.

Which is rather ironic given his condition since in all of his brilliance he didn’t have the power to heal himself.   I worship someone who rose from the dead, so if he could have fixed himself I would have been more impressed.  Some may find that statement a bit harsh or over-the-top, but I believe that only a fool would say in his heart that there is not a God.  Let alone someone in a wheelchair who cannot even speak without the help of a machine, who would take the time to challenge God and anyone who believes in God. I don’t have time for people like that, even if our modern society wants to celebrate this kind of brilliance.

Which was also rather interesting to me because he spent most of his time proving his “theories” and then turned around and said he had to disprove his theories as being wrong.  That is what this movie is about The THEORY of Everything and my theory at the end of this movie was that this guy sucked at relationships and this movie was a complete waste of our time.

His wife turned out to be a saint and he turned out to be a jerk.  She could have pulled the plug on him and let him die before he ever reached his fame and fortune and then he turned around and leaves her for some other woman who was fascinated by the limelight that the world gave him.  Even if he was a brilliant person, with a cruel disease and stuck in a wheelchair, he seemed to me to be incredibly stupid when it came to how he treated people who loved him.  I was not a fan of this guy and found his life story read like a Greek tragedy.

It was bad enough to watch him go through his challenges with his debilitating disease, which was terrible and we felt very sorry for him and his struggles.  However to then throw his relationship with his wife and others into the mix was just not an enjoyable film.  Of course, he had to talk about how he was smarter than God throughout the film too, which was even more annoying.

What was great about this film was the acting and the actor who played Stephen Hawking needs to earn an award because he was amazing.  He really played the role well, even if we were not a fan of the person he was portraying.  Stephen turned out to be an Evolutionist, which was not a surprise.  Scientists like Hawking choose to ignore certain laws and truths when it is convenient, including the fact that the Theory of Evolution is mathematically impossible.  This is a good article on that topic if you’re interested in seeing why Evolution is a mathematical myth – http://www.icr.org/article/493/

Anyway, we would skip this movie or wait to watch the rental if you’re interested.