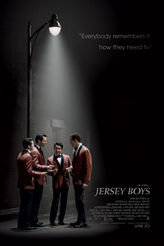 Becky and I went to see Jersey Boys last week when we were in Seattle running the Seattle Marathon at the AMC theaters downtown Seattle, WA.  The Fandango website at Jersey Boys describes the movie as follows…

“Adapted from the 2006 Tony Winner for Best Musical, this bittersweet saga dramatizes the rise and fall of Frankie Valli and the Four Seasons – one of the key pop groups of the early ’60s, responsible for such iconic hits as “Sherry,” “Walk Like a Man” and (&”Big Girls Don’t Cry.”} The story opens in New Jersey, where young Francesco Castelluccio (John Lloyd Young) and his buddies face a narrow window of future career options. Their possible paths include show business on one hand and organized crime on the other, embodied by the slightly menacing yet avuncular kingpin, Angelo “Gyp” DeCarlo (Christopher Walken), who runs the neighborhood and keeps an eye on them…“

The Review: Becky and I have never seen the musical Jersey Boys, so we didn’t know what to expect with this movie about music legend Frankie Valli.  What we did expect was a slow moving film since it was directed by screen legend Clint Eastwood.  The acting and directing of this film was very well done and it is a very interesting movie.  We were not sure if it is a true story, but it certainly gave the impression that it is based on a true story.  Even if you don’t know any of the music from this era, the movie is very well done.

We are also not huge fans of musicals, but the way this film is done it doesn’t feel like a musical.  There is plenty of music, but unlike musicals where everyone breaks into song at inappropriate times there is none of that nonsense with this movie.  You can put this one on your list to watch because it is very entertaining, fascinating and plenty of drama.  We both really liked it and would recommend it as being worth the trip.