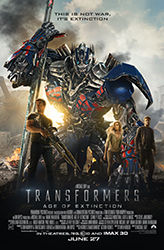 Becky and I went to see the new Transformers today at the Regal theater in Lone Tree, CO.  The Fandango website at Transformers describes the movie as follows…

“The Transformers film series continues with this fourth entry from director Michael Bay and executive producer Steven Spielberg. In the devastating aftermath of the fight for humanity, an enigmatic group strives to alter the course of history as an ancient force of evil plots the destruction of mankind. In order to defeat it, Optimus Prime (voice of Peter Cullen) and the rest of the Autobots must join forces with a new, resilient band of humans who will fight an epic battle that will determine the fate of the entire human race. Mark Wahlberg and Jack Reynor co-star. ~ Jason Buchanan, Rovi”

The Review: I talked Becky into going to see the new Transformers with me today.  Most of these movies have been pretty bad with over-the-top explosions and ridiculous situations that nobody could ever survive through and this film is more of the same, but somehow they are still fun to watch.  The Transformer characters were pretty much the same as before with a few new ones that showed up and the possibility for total annihilation of the planet.  There’s a big surprise!  The cars are really cool, which is one of the reasons why I like these movies.

Conroy went and saw it on Friday without Becky and I, but he really didn’t like it.  He thought the story was lame and it was just blowing things up all the time.  Becky and I liked it, but Becky thought it was way too long and “stimulation overload”, but I thought it was what I expected and found it entertaining.  If you like science fiction action movies and Summer blockbusters than put this one on your list and you shouldn’t be disappointed  It’s not a great movie, but it’s fun to watch and not realistic by any stretch.