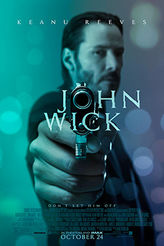 Becky and I went to see a sneak preview of the film John Wick at the AMC theaters in Highlands Ranch, CO.  The Fandango website at John Wick describes the movie as follows…

“Retired hit-man John Wick (Keanu Reeves) hits the streets of NYC in search of the gangsters who robbed him of his reason for living in this Lionsgate thriller featuring Michael Nyqvist, Alfie Allen, Adrianne Palicki, Ian McShane, John Leguizamo, and Willem Dafoe….”

The Review:  If you go see this movie, just think of the Matrix because that’s how much killing takes place in this film with Keanu Reeves as John Wick.  It is extremely far fetched with John Wick having almost super hero skills, but it’s a pretty fun action flick overall.  I liked this movie much more than Becky did, since it’s a “guy flick”, but the character is so much like Neo in the Matrix that it’s a bit too much at times.  The story isn’t nearly as good as The Matrix either.  It’s one of those movies that you think you’ve seen before with movies like Jack Reacher and others, which is one of the problems with the film.

It’s not a terrible movie, but it’s definitely a “me too” movie that has been done so many times before with the “hit man” or the special operative movie like Taken and Take 2 and soon to be Taken 3.  I think that’s the biggest flaw of the film is that it’s not unique enough compared to other films that we’ve all seen before.  I did like some of the cinematography and the way the takes people out is pretty cool since he doesn’t really think about it and always takes a kill shot.  That was different from other films like this where the character is almost being “nice”.  The fight scene at the end was lame considering how many people he takes out earlier on in the film.

I would have to say that this is a good rental to wait until it shows up on Netflix or at the rental box.  I’m sure it will become a cult classic like The Matrix once it goes into the video world.