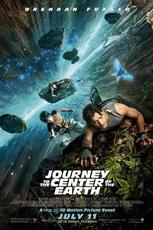 Becky and I took the kids to see the new Brendan Fraser film earlier today at the Kerasotes theaters in Castle Rock, CO. The Fandango website at Journey to the Center of the Earth describes the movie as follows:

“During a scientific expedition in Iceland, visionary scientist Trevor Anderson (Brendan Fraser), his nephew Sean (Josh Hutcherson) and their beautiful local guide, Hannah (Anita Briem), are unexpectedly trapped in a cave from which their only escape is to go deeper and deeper into the depths of the Earth. Traveling through never-before-seen worlds, the trio comes face-to-face with surreal and unimaginable creatures–including man-eating plants, giant flying piranha, glow birds and terrifying dinosaurs from days past. The adventurers soon realize that as volcanic activity increases around them, they must find a way back to the Earth’s surface before it is too late…”

The Review
is a fantastic family film that is fun and exciting for the whole family. It’s being shown in 3D and we did’t go to it in 3D, but you can tell when you watch it that there is a great deal of 3D technology in the film. It was really good, but it’s probably great in 3D, so you may want to find a 3D theater if you are interested.

We still liked it though and thought it was a great deal of fun and excitement. The kids really liked it and I found that I jumped a couple times during the movie. Brendan Fraser did a great job acting in this movie, especially since so much of the film is green screen. There are some really wild parts of this film, including the dinosaur scenes and some of the other challenges the characters face during their journey to the center of the Earth.

We all liked it enough to recommend it as a Don’t Miss It.

John is an auto consultant with JFR & Associates BASEketball rip in Denver, Colorado. He can help you save time and money on any make or model, new or used, lease or purchase – nationwide! Call or email John about your next vehicle! jboyd@coolcarguy.com