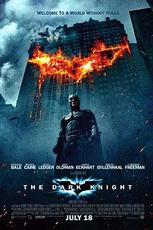 Becky and I took the kids to see the new Batman film yesterday at the AMC theaters in Highlands Ranch, CO. The MSN movie website at The Dark Knight describes the movie as follows:

“Christopher Nolan steps back into the director’s chair for this sequel to Batman Begins, which finds the titular superhero coming face to face with his greatest nemesis — the dreaded Joker. Christian Bale returns to the role of Batman, Maggie Gyllenhaal takes over the role of Rachel Dawes (played by Katie Holmes in Batman Begins), and Brokeback Mountain star Heath Ledger dons the ghoulishly gleeful Joker makeup previously worn by Jack Nicholson and Cesar Romero. Just as it begins to appear as if Batman, Lt. James Gordon (Gary Oldman), and District Attorney Harvey Dent (Aaron Eckhart) are making headway in their tireless battle against the criminal element, a maniacal, wisecracking fiend plunges the streets of Gotham City into complete chaos. ~ Jason Buchanan, All Movie Guide…”

The Review The Punisher ipod
is the best super hero movie to date. It’s very dark, extremely violent as you might expect from a Batman and Joker film, but it’s done extremely well. The character of the Joker, played by the late Heath Ledger is driving record ticket sales as people flood to the box office to see him in record numbers. The film has broken box office records this weekend and I definitely thought it was worth the price of admission.

BASEketball full If you are a super hero, especially a Batman fan than you will love this movie. Becky didn’t like it and fell asleep, Bianca hated it, but the boys liked it. It’s very violent, definitely PG13 and probably too violent for kids under 10 years of age, so be forewarned. Heath Ledger should win an Oscar for his performance, even if he’s no longer here to receive it.