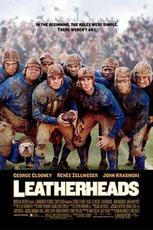 Becky and I went to see Leatherheads

at the Kerasotes theaters in Castle Rock, Colorado on Friday. The Fandango website at Leatherheads Waking the Dead rip describes the movie as follows:

“In 1925, Dodge Connolly is a charming, brash football hero who is determined to guide his team from bar brawls to packed stadiums. But after the players lose their sponsor and the entire league faces certain collapse, Dodge convinces a college football star to join his ragtag ranks. The captain hopes his latest move will help the struggling sport finally capture the country’s attention. Welcome to the team Carter Rutherford, America’s favorite son. A golden-boy war hero who single-handedly forced multiple German soldiers to surrender in WWI, Carter has dashing good looks and unparalleled speed on the field. This new champ is almost too good to be true, and Lexie Littleton aims to prove that’s the case. A cub journalist playing in the big leagues, Lexie is a spitfire newswoman who suspects there are holes in Carter’s war story. But while she digs, the two teammates start to become serious off-field rivals for her fickle affections.”

The Review
Leatherheads Black Snake Moan the movie starring George Clooney is a very boring film. It was clean, although hearing the actors take God’s name in vain a dozen times isn’t very enjoyable as a Christian, but beyond that the movie was lame. The scene in the Preview with the big football player who gets told to hit the other players and punches them in the face was already done in “The Longest Yard” with Burt Reynolds, along with a few other football films.

There wasn’t much in this movie that hasn’t been done before, except watching George Clooney get in a fight with his co-star for what was supposed to be a half-hour on the film without getting a mark on his face. I think that’s part of the problem is that it was too far fetched, at times it was a drama and then a comedy and it just wasn’t done very well. George Clooney’s character at times was extremely smart and at other times I thought I was watching his character from “Oh’ Brother Where Art Thou”.

In fairness to the actors, the acting wasn’t that bad, but the Directing was mediocre and the movie isn’t worth the price of admission, so we would suggest waiting for the rental rack on this one. I can’t say we will rent it and see it for a second time, so it’s good for a one time showing.