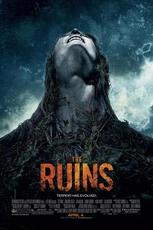 It’s hard to believe, but Becky and I went to see The Ruins at the AMC theaters in Littleton, Colorado last week. The Fandango website at The Ruins describes the movie as follows:

“Bright sun, warm waters and sandy beaches beckon countless Americans every year, particularly young adults seeking inexpensive fun. Enter Amy and Stacy, two best friends who bring along their very different boyfriends–focused med student Jeff and free-spirited partier Eric. As the group’s vacation nears its end, they journey into the lush Mexican jungle in hopes of seeing some ancient Mayan ruins. But when they arrive at the magnificent site, an unexpected event drives the frightened travelers to the top of the crumbling stone structure, where they confront hidden deadly horrors and engage in a brutal battle for survival.”

The Review
The Ruins was apparently a really spooky novel that neither of us took the time to read and based on the movie I don’t think we missed much. The movie is much like a horror movie remake of a movie like Jaws only in this case the beast that eats people is a giant plant that lives on top of an ancient Mayan ruin. The moral of the story is beware of where you go on vacation.

Suburban Girl movies Once one of the cast of characters touches the ruins, the local natives require them to go to the top of the ruins and wait to be eaten by the monster vines living on the ruins. The locals will whack them if they come down off the ruins and the man-eating vines apparently like to tease their prey before they eat them.

The film is pretty strange and it moved really slow, but it’s too disturbing at times, especially when this girl freaks out and starts cutting herself up with a carving knife. It’s extremely graphic and definitely not worth the price of admission. I don’t think it did its job as a horror film since it was just gross. It’s really a demented movie. At best it’s a rental, but more of a waste of time than anything, so if you’re still interested – you might want to read the book.