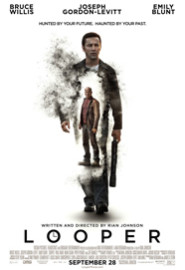 Becky and I went to see the movie Looper at the AMC Theater in Highlands Ranch, CO.  I’m still behind on writing movies, so Im’ writing them as I have time.  I’ve been working on my new book for ShareMerchant.com, which has been taking a great deal of time, so that I can get it launched very soon.  The Moviefone website at Looper describes the movie as follows…

The Review: Looper is a strange movie that takes place in the future when people can time travel, but it’s outlawed.  The crime syndicate has taken over the ability to time travel and they are using it to eliminate people that get in their way by jumping back in time and having them whacked.  The people who do the elimination are the Loopers and the main character is one, until he discovers that his time is coming to an end and they are going to send his 30 year old self back in time to be killed by himself.

That last part in itself is pretty stupid.  Why wouldn’t you have a Looper kill another older Looper, instead of killing themselves, which would create a problem for most people?  The movie jumps around quite a bit with stories going on within stories and characters that you meet briefly.  You never get emotionally attached to these people before they are gone, so they are more like “filler” for the film.

The Preview for this movie looked pretty good, but the Preview is definitely better than the movie.  Bruce Willis looks too old and doesn’t match the younger character of himself very well.  It reminded me of that stupid movie that Mel Gibson did years ago, “Signs” that sounded interesting, but went nowhere.  This film is disturbing on a number of levels, not the least of which is when they go back in time to kill children, who someday may grow up to be the bad guy of the future.  It’s pretty twisted.

We didn’t like this movie and I would have to say it’s between a Rental and Don’t Bother.  Becky definitely opted for the Don’t Bother and I’m pretty much there with her, but I’ll give it a Rental.