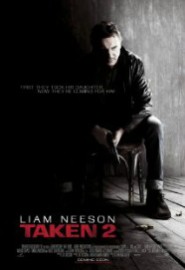 Becky and I went to see the movie Taken 2 at the Hollywood Theater at SouthGlenn Mall in Littleton, CO last night with our friends Mark & Maria. I’m still behind on writing movies, so I’m writing them as I have time. I’ve been working on my new book for ShareMerchant.com, which has taken a great deal of time, so that I can get it launched. The Moviefone website at Taken 2 describes the movie as follows…

The Review: Taken 2 is the second installment of the Liam Neeson flick where he’s an ex-government agent that has to protect his family from evil men, who are trying to kill them.  Becky was funny and said, “How many times can you get stolen?”  Well apparently the answer is twice.

In the first movie Taken, his daugher is abducted by an Albian gang and he has to go and save her life.  After killing these wicked men, their relatives, are now coming back for revenge and they are determined to take the family and torture them for killing their family.

The movie is too much like a repeat of the first one with a slightly different twist since the bad guys are now after him, instead of his daughter.  It’s an exciting movie, but it’s not overly entertaining.  At least Becky and I were not overly thrilled about it.  It’s an okay action movie, but I would wait for the rental on this one.

Sponsored By: SHAREMERCHANT.com: Get paid to share! Find out how you create an income by recommending products. Become a Share Merchant!