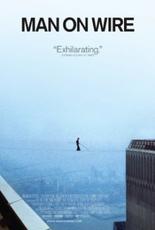 Becky and I went to see the new film Man on Wire on Friday the Chez Artiste theaters in Denver, CO. The Fandango movie website at Man on Wire describes the movie as follows:

“On August 7th 1974, a young Frenchman named Philippe Petit stepped out on a wire illegally rigged between New York’s twin towers, then the worlds tallest buildings. After nearly an hour dancing on the wire, he was arrested, taken for psychological evaluation, and brought to jail before he was finally released…”

The Review
Man on Wire is an amazing documentary that will make your palms sweat. Just look at the movie poster of the man walking between the World Trade Center towers, a quarter of a mile in the air and you get an idea of what this movie is about – doing something impossible.

I heard some people say that they didn’t like this movie and that could be because it’s a documentary and a bit like The Blair Witch Project with the camera footage being a bit scrambled at times. At other times, the camera work is fantastic.

However, if you watch the film and pay attention, Man on Wire is a definite four star movie that you definitely want to see on the big screen. The story is just too incredible, especially given what this man and his team had to do to pull off this unbelievable feat of human acrobatics and ingenuity.

We both thought it was worth seeing and would recommend it. I think I liked it more than Becky did, so I’m going to rate it a Don’t Miss It.