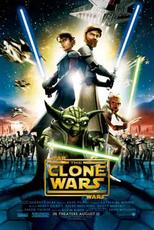 “Star Wars: The Clone Wars showcases an entirely new look and feel to the galaxy far, far away–combining the expansive scope of the Star Wars Saga with state-of-the-art computer-generated animation. On the front lines of an intergalactic struggle between good and evil, fans young and old will join such favorite characters as Anakin Skywalker, Obi-Wan Kenobi and Padmé Amidala, along with brand-new heroes like Anakin’s padawan learner, Ahsoka. Sinister villains–led by Palpatine, Count Dooku and General Grievous–are poised to rule the galaxy. Stakes are high, and the fate of the Star Wars universe rests in the hands of the daring Jedi Knights. Their exploits lead to the action-packed battles and astonishing new revelations that fill Star Wars: The Clone Wars.”

The Review
Star Wars: The Clone Wars is the latest opportunity for George Lucas to try to keep his Star Wars saga alive with a new animated story about how Anakin Skywalker and Obi-Wan Kenobi saved Jaba the Hut’s nephew to gain passage for the Republic through his territory before Anikan became the evil Darth Vader. That pretty much sums up this film.

Although Becky, her Mom Betty, Bianca, Conroy, Corban and I all started out in the theater together, within 10 minutes, Becky, Bianca and Becky’s Mom were gone and went to see Mama Mia. If that tells you anything about this new Star Wars cartoon.

If you are a huge Star Wars fan you will probably really like this, but it probably could have been on The Disney Channel for free or on Saturday Morning with Bug’s Bunny re-runs. I saw the original Star Wars over 25 times when I was a kid when it first came out back in the mid-70’s, so I knew what was going on in this story, but it was still pretty lame. It kept your interest for a while and then became pretty boring. The boys liked it, although Corban got lost with the characters in this never ending soap opera.

If you have nothing better to do with your time Star Wars: The Clone Wars may be a nice show to take the kids on a cold and rainy afternoon, otherwise wait for the rental.