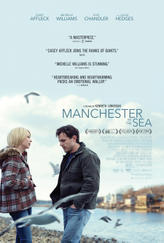 I went to see the new Star Wars movie Rogue One last week the AMC theater in Castle Rock, CO.  The Fandango website at Manchester By the Sea describes the movie as follows…

“A hardened handyman named Lee (Casey Affleck) returns to his hometown in New England after the death of his brother (Kyle Chandler) to care for his 16-year-old nephew (Lucas Hedges), but his arrival also unearths his checkered past. Soon, Lee comes back into contact with his estranged wife (Michelle Williams) as he deals with life in his tight-knit former community…”

The Review:  Manchester By the Sea is a film that is getting rave reviews.  The acting is spectacular, especially Casey Affleck, who is the main character.  The story is disturbing and extremely depressing.

The story is all about this guy who has a hard luck story and it goes through why he is such a mess.  The reason he is such a disaster is because he’s had a really bad event happen in his life and now his brother has passed away.  He needs to take care of his nephew and he’s not fit to do this on his own.  At least he doesn’t think so and this makes for a very boring movie.

Becky and I were not sure why everyone liked this movie.  It was boring, depressing and a little too real with serious raw emotion about how life can throw you a serious curve ball.

We left the film feeling like we had wasted our time.  The acting was great and the directing was good, but the story was not worth watching.