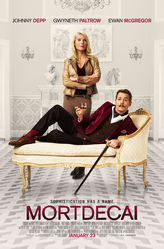 Becky and I went to see the new movie Mortdecai at the Regal Cinemas in Lone Tree, CO yesterday with our friends Hope and Chris. The Fandango website at Mortdecai describes the movie as follows…

The Review: The Rotten Tomatoes website gave this film a terrible review, but Fandango gave it a much favorable review. Which is one of the reasons why I am skeptical about many of the review sites that are out there, but we decided to go and see it last night anyway.  Our friend Chris is not a big Johnny Depp fan and he liked it and thought it was funny.

I really liked this movie and thought it was really well done.  Gwyneth Paltrow was really great in this film, as the wife of Mortdecai who is played by Johnny Depp and his man servant “Jacque” played by Paul Bettany really made the movie.  I thought the writing was very well done and it was Directed well also.

The film reminded me a little bit of the Pink Panther movies where the inspector was a ding dong, but the character was still funny.  This is how this film is with Johnny Depp’s character, but he is a bit more intelligent than the famous inspector in those films. There are some good laughs and plot twists in this movie and the entire cast did a great job on this movie.  It is too bad that it’s not doing well at the box office.  I think Depp was better in this movie than in the film Dark Shadows that he did a few years ago that was a whacky comedy.

We all liked it, but I definitely liked it more than Becky did.  She thought it was “okay”, probably more of a rental than being actually worth the trip. I thought it was really well done and was somewhat of a sophisticated comedy, if there is such a thing. When you see it you will know what I mean, but it could be because it takes place mostly in London.

I recommend it and I will probably see it again when it comes out on Netflix or on DVD.