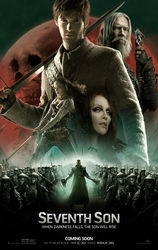 Becky and I went to see the new movie Seventh Son at the Regal Cinemas in Lone Tree, CO tonight with our son Conroy. The Fandango website at Seventh Son describes the movie as follows…

“A powerful knight trains his young apprentice to do battle against a diabolical witch who is gathering an army to wage supernatural war on all of mankind in this adaptation of author Joseph Delaney‘s young-adult novel The Spook’s Apprentice. Years ago, brave Master Gregory (Jeff Bridges) succeeded in capturing evil enchantress Mother Malkin (Julianne Moore), and locking her away to rot in prison. Now Mother Malkin has escaped, and she’s hungry for revenge. As her followers gather power, the dreaded witch reveals her infernal intentions to the noble knight who once imprisoned her, and who now has until the next full moon to train Tom Ward (Ben Barnes), the seventh son of a seventh son, to defend humanity against a threat whose evil knows no bounds. ~ Jason Buchanan, Rovi”

The Review: Conroy and I have read the entire Last Apprentice book series by Joseph Delaney, so we were looking forward to this movie and always thought it would be cool if the books were made into a movie.  Unfortunately this is one of those films where the screenplay was not written by the author of the book series and the movie doesn’t match the book at all.  It’s really unfortunate because it could have been like Harry Potter or other fantasy films where the film actually followed the book.  Instead it was pretty terrible if you are a fan of the book series because the book series is excellent.

The film is a bit like a Van Helsing type movie and it has plenty of action and the story is okay, but there are more warlocks than witches and too many characters that are not in the book.  The acting is good and it was a pretty good movie if you wait for it as a rental.  It could have been such a great movie, but it was disappointing.  Becky thought it was a rental and I did too.  Conroy said that it might have been worth the trip if he hadn’t read the book series, but I didn’t really feel that way.  I don’t think it was that well done, but too much of a film that has been done before.

I would definitely wait for the rental on this one and if you want to read an interesting book series, pick up the books.